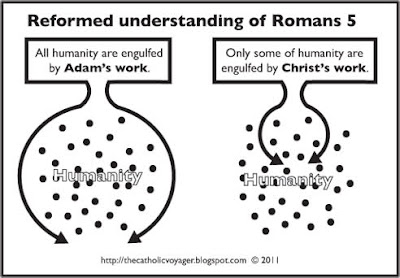 Okay, so I finally broke down and read Bell on hell. I don't usually read the latest evangelical best sellers until at least a couple of years go by. That way anything that isn't worthwhile will be remaindered and forgotten, and I won't need to waste my reading time. If something is still around, then it merits my attention.

However, Bell's Love Wins has created quite a fuss among some New Hope students and faculty. Wayne Cordiero, NHCC president, is a close friend of Francis Chan, who has recently written his own book in response to Bell. I certainly didn't want to be drawn into discussions and pull a Piper so I figured I should have a look.  (I am grateful that a good friend loaned me the book, so I could save my money for something more deserving, like James Dubay's The Evidential Power of Beauty or Peter Leithart's Defending Constantine. )

Anyway, it's my first Bell book. It's easy to read, full of questions, very, very popular and deliberately non-scholarly. In fact, it's downright sloppy about exegesis. That's really frustrating!  find myself agreeing  with Kyle Small, writing in the June 2011 Covenant Companion, that the book isn't really about heaven and hell: it is about election, and that Bell is reacting against his Reformed Calvinist tradition. This might explain Bell's stridency at various points. For those of us who do not share that tradition, reading "Love Wins" is not all that upsetting or enlightening.

I had to laugh at Kyle's observation:


This book is anything but radical for the Evangelical Covenant Church. The Covenant has held strongly to a view of the atonement where “God’s love for the world is magnified” and less so to the more classic substitutionary model of atonement where “the wrath of God is satisfied.” Covenant theology rejoices that God came to love the world and generously gave himself fully to us. I would venture to say that Bell becomes a Covenanter in his middle chapters. He even sounds like P.P. Waldenström in a few places (who was also wrongly criticized for being a universalist). As I re-read sections of the book, I wondered if the Covenant Church (via the Communications Department) had been invited to edit the work, especially the tone and phrasing, would this book have be more palpable? Perhaps!

Kyle is spot on as he concludes his review:


This book that many of us cannot understand. I continually felt like I had entered another family’s argument. Bell is overly polemical throughout these pages. Several friends have commented that wherever Bell says something clear and helpful he uses the next page to make a point that resembles a sword and not a ploughshare. He seems to write as if embattled from the outset.

I think Bell is responding to his theological past—a past that many North American young people continue to revolt against—in profound ways. Bell is a Reformed guy with a love for C.S. Lewis. If you grew up Baptist, Bible church, Reformed Church, or even conservative Presbyterian, this book might deeply resonate with you. And most Americans have a Reformed view of God in their back pocket, even when they are not aware of it (see Sydney Ahlstrom’s A Religious History of the American People). Lutherans would be one of the few groups to be somewhat disengaged from the topic altogether.

Reformed theology is centrally concerned with the theological topic of election. Bell’s tradition most often stresses certainty of salvation and election, including predestination. Reformed folks, like John Piper, read the Bible through the lens of election, asking, “Who has God chosen and not chosen? God chose Israel, God chose Jesus; did God choose me?” This question strikes fear in the heart. This fear responds by seeking salvation because the other options scare the hell out of us.....

American Calvinism has this interesting acronym for their theology called TULIP. I don’t necessarily understand it, but it has to do with the question, “Who is in/out?” If you resonate with John Piper, your perspective is primarily on “Who is in?” and “How do we assure ourselves of this?” If you resonate with Bell, the perspective is “Who is out?” and “How do we welcome them in?” If you resonate with neither and wonder why this book has produced such a firestorm, perhaps it is because you believe in a God who blesses the world, inside and out, or possibly because regardless of debates about heaven and hell, open or closed, you believe that Jesus Christ is the world-concerned story of how love wins.

Precisely. Reformed theology has nominalist DNA.   One of the by-products of nominalism is individualism, and a preoccupation with the problem of how it is possible to "group" individuals. This leads to a focus on a sovereign God who becomes the ultimate agent for grouping. "Either/or" thinking prevails. However, those of us whose theology is informed by a realist metaphysic delight in the way all things are related and ultimately relate to God, who Himself is a perfect community of Three Persons. Sin ruptures relationship, and separates us from God, and this leads us to focus on Jesus Christ, who is the ultimate agent of reconciliation.  As Waldenström writes,


When we started to speak of reconciliation, we raised the question if it was God, or man, or both parties, who was, or were, to be reconciled. Now we have searched the Bible and have found that it does not speak of God as being reconciled. The love of God had not been diminished through man's sin, so that it needed to be improved, increased or restored; nor could God's hatred of sin be done away with, for if He did not hate sin, He would not be righteous; neither could God's displeasure to those who live in sin be done away with, because even yet, this very day, God is displeased with all who live in sin. No change has taken place in Him. He remains the same; with Him there is "no variableness, neither shadow of turning." He is the eternally faithful, unchangeable God, whose name is Jehovah (that is, "I am that I am").

On the contrary, man needed to be reconciled to God....The Scriptures testify that man, as estranged from God, is carnal. It is not the Spirit of God that fills and rules him, but the flesh. But "the carnal mind" ("the mind of the flesh," according to the Revised Version) "is enmity against God," says Paul (Rom. 8:7). That is the chief trouble; not this or that transgression or misdeed; nay, but the very mind, is enmity against God: "for it (that is, this mind) is not subject to the law of God, neither indeed can it be." Of the same thing the apostle speaks in Col. 1:21, where he says to the Christians: "Ye were sometime alienated and enemies in your mind by wicked works." "The wicked works" of the ungodly are never isolated; they are expressions of the wicked, or evil mind. And the evil mind is enmity against God. This the natural man will never admit. Even though he may admit that now and then in his life and in his works he may be at fault or be mistaken, still he will hold that in the depths of his heart he is good. But no, says the apostle, the natural mind itself in man is enmity against God. It is a terrible judgment which the apostle by these words pronounces upon all that bears the name of man; but it is a true judgment.
In short, the heart of the world is estranged from and dead to God, averse to him; and this makes it unblest. Here, as we have said, a reconciliation must take place, a reconciliation which brings man into an entirely different relation to God, if he is to become happy. But how, then can such a reconciliation be brought about? By the removal of sin, and by the justification of man. That which separates must be removed. Otherwise there can be no reconciliation. But that which separates is sin. From this fact we understand why "the reconciliation of the sinner to God" always depends on "the atonement of the sins," that is, on removal of the sins. We repeat it again: By being cleansed from sin, the sinner comes into a right relation to God. In no other way can such a relation be brought about.


There are individual hells
and communal, society-wide hells,
and Jesus teaches us to take both seriously. (p. 79)

Eternal life doesn't start when we die;
it starts now.
It's not about a life that begins at death;
it's about experiencing the kind of life now that can
endure and survive even death. (p. 59)

Jesus invites us
in this life,
in this broken, beautiful world,
to experience the life of heaven now.
He insisted over and over that God's peace, joy, and love
are currently available to us, exactly as we are...


Bottom line:  IMO Bell asks good questions, but doesn't have the personality, mind and theological tradition to provide good answers.  I'm going to look for Jerry Wall's Hell: The Logic of Damnation. It's been out for 9 years now, and it has infuriated some Calvinists, so it ought to be good. ; )
Posted by Beth B at 1:00 AM